First race of the year and one I was hideously unprepared for. So much so that, had I not recently pulled out of the Wendover Woods 50 late last year, I may not have started this one. In preparation for the 45 mile Country to Capital race the furthest I had run since Valencia Marathon in mid-November was 16 miles

So, while I was pretty confident I would finish the race, I had no idea how long it would take or what sort of state I would be in by the end of it.

Happily the start at Wendover is only 20 minutes from my bed so it was a fairly relaxed start to the day, turning up my obligatory hour before the race start time. Formalities and ablutions over I just had time to meet fellow Handy Cross Runner Pete (who would beat me by nearly an hour even though seemingly hacking up a lung on the startline), say goodbye to the equally ill Charmain – more later – and fight my way back through the throng as somehow I had ended up in the front of the pack.

My main tactic was to attempt to get to around mile 13 (where I was originally going to meet Charmain who would run a bit with me) in 2 hours. This first half marathon distance was the hilliest, prettiest and proved to be the most satisfying part of the route. I’ve lived around this area most of my life but hadn’t run most of these trails. There was plenty of uphill to walk, plenty of stiles and kissing gates to queue up at and plenty of pastoral views to take the mind off running.

I hit the Chalfont-Rickmansworth road bang on 2 hours after a long and laborious climb up from Latimer. Cue smug face. The next target was to reach 25 miles in 4 hours. I then thought I could attempt the next 20 in a similar time, coming in at around 8 hours.

The next few miles were a dream, mostly downhill, mostly on soft but not treacherous ground. But abruptly both the soft ground and the bucolic views ended. Coincidentally so did my enjoyment of the race. We were 18 miles in with 23 still to go.

Out of the woods and crossing a road at the back of the Chiltern Open Air Museum (a great little cut through should you ever need to get from Amersham to Maple Cross – ok a bit niche but you never know) and our first glimpse of the fly tipping that would come to blight and define most of the rest of the race. At first just the usual bits of rubbish but soon we faced the prospect of seemingly an entire house of bricks dumped in the middle of a single track road. To their credit the tippers (or maybe residents) had lined the bricks down the middle so that 4×4’s could pass easily and lower hung cars could gamble with their exhausts, axles and trims.

But the rubbish kept on coming. Narrow, leafy, windy lanes were adorned with cement bags, plastic bags and even a discarded handbag. To be fair it got better as we dived down towards Maple Cross and back up what was to be the final hill circumnavigating Denham Aerodrome.

From here on it was all, geographically and metaphorically, downhill.

My legs were feeling the lack of preparation, I had a pins and needles feeling around my left knee and my right hip hurt. Manfully I soldiered on.

I was counting down the miles until Checkpoint 3 which would take me to the magic 25 mile mark after which I was going to start my run/walk strategy. Normally I wouldn’t do this until I passed 50 miles but

b) I was underprepared (have I mentioned that yet?)

c) I didn’t want to run any more

I got to the checkpoint in 3 hours 50, 10 minutes ahead of schedule. 18 miles to go and everything was sore. Legs, obviously, and hips. But also my lower back was killing me. I haven’t worn my race vest for months, probably not a full one since the Salisbury 54321 in August and my pathetic frame wasn’t enjoying the extra weight.

Add to this the monumental and near-constant amounts of litter that accompanied me along the Grand Union Canal and it made for a fun few miles. One thing that did cheer me up, however, was a constant battle I was having with a few of the runners around me. The first one I had overtaken at Denham Golf Club and since then we had been passing and re-passing each other. Then there were a couple of chaps running together who I would get close to while they were walking, but as I got near either they would start running or my watch would tick over to the magical half hour mark and I would be able to walk, letting them get away from me.

I’d decided to run 25 minutes and walk 5 after the 25 mile checkpoint, hoping that I would keep a fairly steady-ish 6 miles an hour for the final 18. 25 minutes has never lasted so long. I was looking at my watch more times than when I pace a half marathon. Outsiders would have thought I had some sort of affliction my hand was jerking up to my face so often. 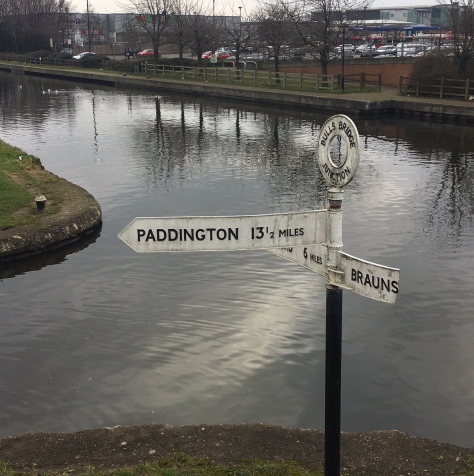 Finally I got into the final checkpoint having taken and been overtaken by not only my 3 rivals but another couple of guys who were unwittingly sucked into my fantasy race. 6 miles left, only 10k – simple. Or alternatively, at least another hours stumbling!

I counted down the miles getting to the point where I thought I only had 2  to go when a far too cheerful runner coming the other way shouted “well done only 3 miles left.” The temptation to give him a surreptitious nudge into the canal was almost too much. 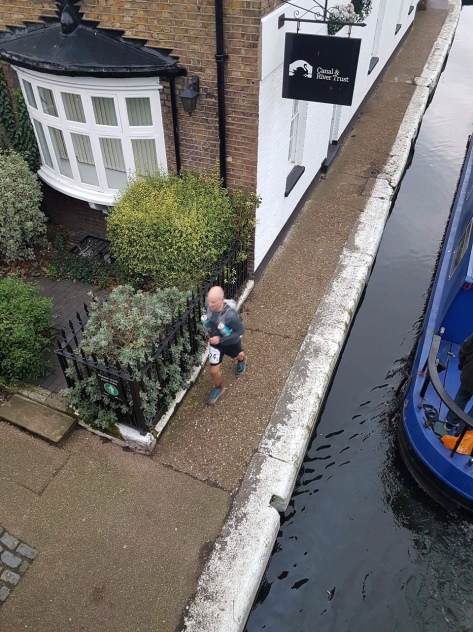 And so on to the finish. I saw in the near distance a bridge with quite a few people on it and hoped that that was the finish. I heard loads of people shouting and clapping and was sure I heard my name but didn’t recognise any of the runners that would have known me. I went through the finish line, got my medal and suddenly there was Charmain, out of her sick bed and having travelled all that way just so I didn’t have to get the train back on my own.

So that was that. I finished in a much better than anticipated 7 hours 7 minutes and 28 all important seconds. The first half was some of the most pleasant running I have done in a long time, the second half – well lets just say I was tired by then and it probably has skewed my judgement a bit. Ok a lot

One valuable lesson it has taught me though; I have always wanted to enter the 135 Birmingham to London Grand Union Canal Race.

Now, not so much