This week I took really late decision to get up to the Lake District for a bit of a runaround. It’s an area I know pretty well having hiked around there in my youth and not-so-youth and I couldn’t wait to get up there for a run.

I’d decided I would keep costs down by sleeping in the car. It was only one night and I’d done it before. On a whim though I checked out a late booking site and came across the Thorneyfield Guest House in Ambleside. I knew the name as a couple of doors down had been Head To The Hills, a walking shop I’d spent a lot of time in. I went to their own website and found they had a room for £35, £35 cheaper than on the booking site and including breakfast. It would have been silly not to!

I left home at 6.30 and was at the Kendal turn of the M6 by 10am. It then took me nearly two hours to get to Boot thanks to the combination of Hardknott and Wryness Passes and some idiot drivers!

By 12 I was parked up and ready to go. The idea was to run from Dalegarth along the valley floor and up to Scafell. Then I’d descend down past Broad Stand and back up to Scafell Pike. Ideally I wanted to then run on and come back along Cringle Crags if I had time. The only time constraint was that I had to check in by 8.30 which meant being back to the car by 7.50.

The weather was pretty much perfect, slightly cool, dry but with the chance of rain (which was to come, on and off in the later parts of the day). The first mile or so was fairly flat along the road to Boot and up past the Woolpack Inn then on to the hills.

I’d finally bought a tripod adaptor for my iPhone and wanted to have a play with some slow shutter pictures (using the Slow Shutter Cam app) so stopped a fair bit at any stretch of water to experiment.

From this stream it was a fairly simple straight line to the the next landmark, Burnmoor Tarn, a fairly sizeable lake. At least it would have been had all my sense of direction not decided to go on a walk of their own. I ended up scrambling on ledges up Eskdale Fell until, way below me, I saw the footbridge I needed to get onto the right path. Several stretches of almost impenetrable bracken and several lacerations later, I was finally on the right path and able to get a bit of running in. Pretty soon it was time for the steady climb up to the first summit, Scafell. 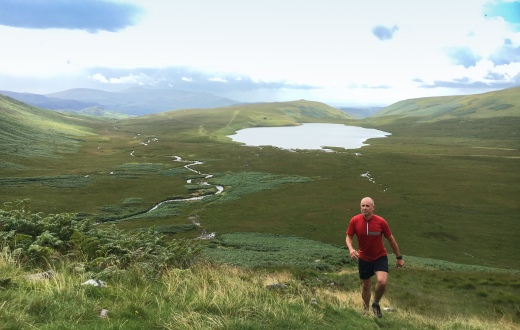 Climbing towards Scafell – Burnmoor Tarn in the background

The climb up was fairly uneventful but I realised quickly that my notions of running serenely up to the peak were wildly optimistic. It became more of a lung-screaming forced march but eventually I got there.

Now for the soul destroying descent past Foxes Tarn before climbing back up again to Scafell Pike. Unfortunately without ropes and knowledge this is the only way to get to Scafell Pike from Scafell. Years ago I climbed through Lord’s Rake, a narrow passage of scree that joins Scafell to a path to Scafell Pike from the Wasdale end but the large boulder that had fallen into the path had recently shifted again so it wasn’t worth the risk. 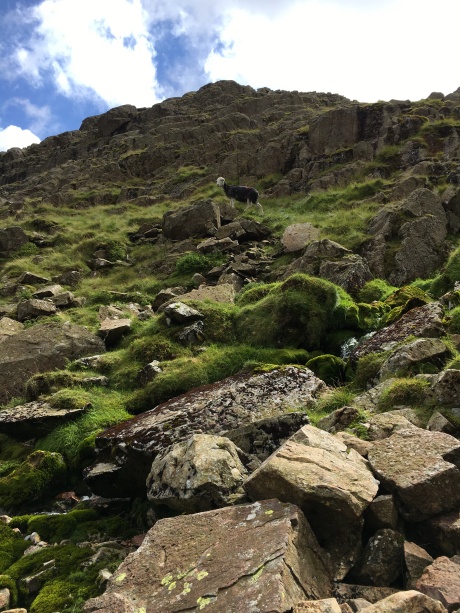 Once you literally hit rock bottom it is a steep ascent back up to Mickledore, the saddle between the two Scafells. Here there is a hand Mountain Rescue box that I’ve sheltered behind before in lousy weather. 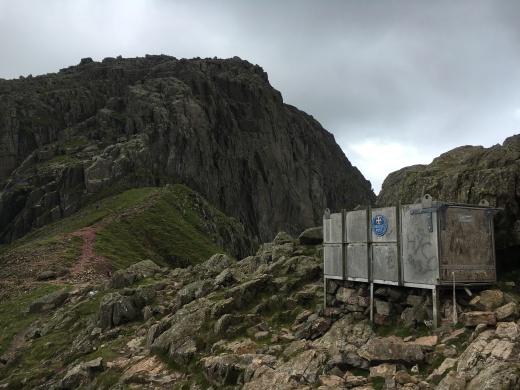 Mickledore looking back towards Broad Stand and Scafell

From here it was a simple run up to Scafell Pike, though the last few metres are a bit of a scramble over sizeable loose rocks. As nearly always happens to me as soon as I hit the summit the fog and rain came in so I didn’t hang around.

Scafell Pike in all its glory

I had to be a bit careful with no visibility to find the right path and ignored my already failed sense of direction relying rather on OS maps and GPS to take me onto the path towards Broad Crag and Great End. Naturally the weather cleared as soon as I was off the summit. 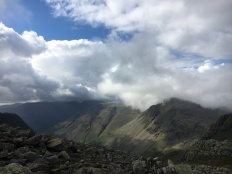 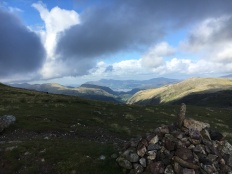 Initially my plan was to then ascend Bow Fell and run along Cringle Crags before returning to Boot but already I knew I was going to run out of time so instead I turned before Esk Pike and started down the valley following the River Esk. Time for a bit more slow shutter stuff.

The run down the valley was fantastic, though quite technical in places. I was running underneath the Scafells and the views back up to the peaks was pretty satisfying, knowing Id been up there only an hour or two beforehand. The path would come and go but I couldn’t get lost as long as I was vaguely near the stream. I got caught out in a few bogs, going up to my thigh in a couple of places but my feet were so wet anyway it just added to the fun.

At a sharp left hand bend in the river I turned right following the contours around Cam Spout Crag (I love these names), and a couple of miles later reached Taw House. 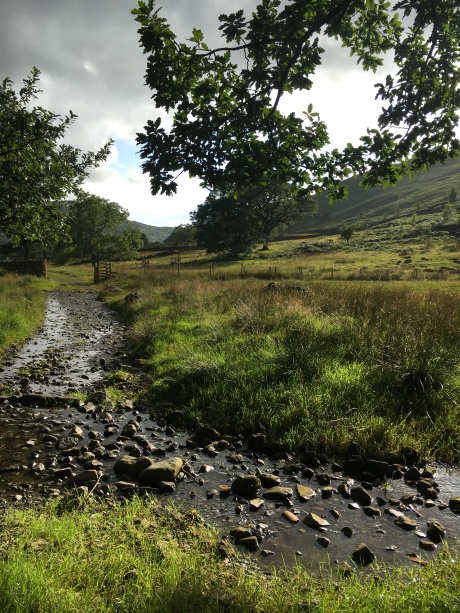 From here I could have run the road back to my car (another couple of miles) but there was an alternative route, crossing the road and continuing to follow the River Esk all the way to Beckfoot Bridge where my car was. 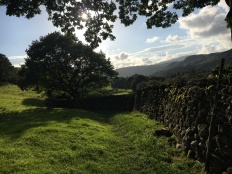 In all an incredible days running, scrambling, climbing and falling over. I’ll definitely do the route again but make sure I’ve got at least a couple more hours to take in Cringle Crags as well. Got to the guest house in time, had a quick shower and best of all got to the chippy just before they closed. Happy days.

A quick word on the kit I took with me – I travelled relatively light but carried most of the essentials.

Waterproof OS map OL6, Satmap GPS, Compass, whistle, foil blanket, plasters, Ashmei hooded sweatshirt, Salomon waterproof jacket, Ronhill gloves, buff, a couple of trek bars and a chorizo sub, Joby gorilla pod and iPhone adaptor, iPhone. The majority of the gear I got into my superb Ultimate Direction Scott Jurek race vest 2 with the tripod and waterproof strapped with the external bungees. Two 500ml water bottles were housed on the front. This is truly an amazing vest and although tiny it is amazing what you can get in it with all the extra pockets it has. I’ve had this one for a couple of years and wouldn’t be without it.First glance of the SJ3 looks like they have done away with all the handy pockets which would be a shame.

I wore an Ashmei jersey (t-shirt to you and me) and Ashmei shorts. The shirt is great with a pack as I never have any chafing, unlike with polyester shirts and the shorts have an inner short which, again has never given me a chafing problem. (I’m not a fan of chafing if you couldn’t guess!)

Finally socks were Hilly mono skins and I ran in a very old pair of Mizuno Harriers. I chose those as they had so much more grip than my Hoka Challengers. They are pretty much at the end of their life now so I’ll be looking for a new pair of light grippy trail shoes. Any suggestions?

Finally, finally, here is a breakdown of the miles